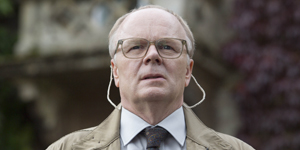 Although almost a distant memory to us now, we’re excited to finally be able to share some very exciting goings-on at Eastwood Park.

The keen TV viewers amongst you may have watched ITV’s new detective series “McDonald & Dodds” last Sunday evening. Well, we can now reveal that Eastwood Park was used as a key filming location for episode 2 (The Wilderness of Mirrors), which premieres Sunday 8th March!

Starring Jason Watkins (The Crown, The Lost Honour of Christopher Jeffries, W1A) and Tala Gouveia (Cold Feet), plus other household names such as Hugh Dennis, James Murray, Freddie Fox and Michele Dotrice, ITV says “adjusting to life in Bath, DCI McDonald and partner, DS Dodds, are called to the Mara Retreat, a private rehabilitation clinic, to investigate the mysterious death of a wealthy patient.”

Film crews took over the Eastwood Park estate for three weeks last September which poses in the episode as the scene of the crime – The Mara Retreat. For those familiar with Eastwood Park keep your eyes peeled for several areas of our house and grounds used for filming. A number of spaces also had a TV ‘makeover’ - can you spot where?

Tune in to ITV at 8pm on Sunday 8th March to see Eastwood Park on national TV.