View scheduled dates across our portfolio of specialist technical training for engineers and estates & FM teams. 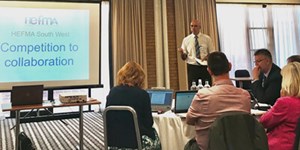 Eastwood Park was pleased to support the HEFMA SW branch 2019 conference in Taunton earlier this month.

With a focus on “Competition to collaboration”, the new Chair of HEFMA South West George Atkinson introduced and led the day, with a range of interesting and insightful sessions around key issues currently facing estates teams in the NHS.

Mark Barriball, Head of Estates and Facilities, Devon Partnership NHS Trust began the morning with an update from HEFMA National Council, where he congratulated the South West group for being one of the most active out of 7 branches around the country. Once again, the difficulties facing the NHS in the recruitment of engineers and estates staff was discussed. Mark suggested that part of the problem comes from a lack of clarity around opportunities for progression - that those working in these roles tend to see themselves as “working in the profession” rather than as “professionals” in their field. Everyone acknowledged the ongoing need to promote career pathways within the NHS, and to join forces with others within the industry to achieve this.

This set the tone of ‘collaboration’ for the rest of the day, as a number of representatives from estates teams in Trusts across the South West took to the floor to share experiences and case studies.

Mark Bagnall, Director of Estates, Facilities & Capital Development, University Hospital Southampton NHS Foundation Trust, delivered a session on wholly owned subsidiaries – a topic that often provokes debate within the NHS - and the implementation of these within his Trust. Following on, Dr Stuart Windsor, Associate Director of Facilities, University Hospital Plymouth Trust, shared his experience of the repatriation of outsourced services within his Trust. This process has taken UHPT 10 years, aiming to “take the best of the private sector and combine it with a public sector ethos”, something Stuart admits was not “the easy option”, and yet has ultimately seen “standards…improved significantly and service standards are stable”.

In the afternoon session, attention turned to ‘integrated pathways and partnerships in a changing NHS’. Robert Steele, Director of EFM, Royal Devon & Exeter NHS Foundation Trust, spoke about the “compelling need for change”, stressing that whatever pathway his Trust ends up taking, “high quality, responsive services which are aligned to providers’ objectives and values” must be at centre of activities. Simon Rigby, Associate Director EFM, Taunton & Somerset NHS Foundation Trust gave a case study around the proposed merger of Somerset Partnership FT & Taunton & Somerset FT; highlighting the current disparity between the two and work to be done around placing resources, rationalisation of the estate, staffing and integration of policies etc.

Iain Roy, Director of Facilities, Northern Devon Healthcare NHS Trust, concluded the day with a look at the options for collaboration NHDT are considering, with a view to delivering long-term sustainability for the Trust. As Iain is shortly retiring after 39 years of service with the NHS, he also took the opportunity to reflect on his career and experiences, praising the HEFMA network and events where the sharing of experiences has been of huge benefit to his career, and a reminder that as estates teams, ‘we’re all in the same boat’.

“Once again we were delighted to see so many HEFMA South West members attend the day, recognising the value of ‘collaboration’ and the vital role that we all play in healthcare.”