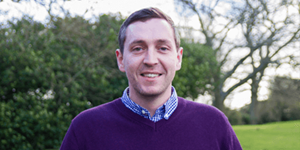 Eastwood Park has led the drive for quality and structured career path training since it began as the NHS national training centre for hospital engineers, in the late 60’s.

Many of today’s Estates Managers and Directors began their career at the centre and the core values of the centre remain paramount today. Our leaders, in the classroom, are more than trainers they are experts in their specialism so can provide the theory but above all demonstrate a truly practical application, through in-depth knowledge, sound examples and wide-ranging experiences.

An example of this was highlighted recently by Estates Manger, Stefan Wall (pictured above), from King’s College Hospital NHS Foundation Trust, London, who was returning for his fourth training course with us.  Now in charge of a team of twelve at King’s, Stefan initially began work as a commercial electrician and worked in facilities maintenance posts within the London Metropolitan University, Tate Modern & Healthcare PFI’s, prior to taking up his position in the Trust, some three years ago.

Stefan had a situation recently in the Trust, where a fault occurred on a three-year old dryer.  He contacted the supplier and was advised that a full service was required which was likely to cost £3,500. This was duly arranged.  However, a week after the service was carried out another fault occurred.

Stefan discussed this with Eastwood Park, MGPS trainer, Michael Ell, to confirm whether he should (and could) look at this fault and carry out the remedial work necessary, Following confirmation from Michael that it was safe to do so, Stefan was able to see for himself that the service had not been fully carried out and Stefan was in a position to be able to challenge the supplier and repair the dryer in-house.

Stefan said, “The trainers are accessible and ready to help, even after leaving the course.  Michael had not just given me the knowledge and skills to carry out the servicing of this piece of equipment, but above all the confidence to push the boundaries in my role and maximise the potential in my job.”

This is just one example where, in servicing this one piece of equipment, Stefan had been able to achieve cost savings for the Trust. He is also able to pass on all his knowledge and learning tips to his team of engineers.